1865 Scored a goal against Warehousemen's "from a splendid drop kick, with a great deal of screw on, sending the ball six or seven times around a tree in the immediate vicinity before it went flying through the centre and won the game".
(The Herald. June 14 1919.)

1867 A beautiful long drop kick (and later a leading Melbourne doctor) and was another effective player for Carlton during the 1867 season.
Scored a goal in the win against Pentridge (now called Coburg).
One of 10 Carlton players to play for the Northern side in the North Vs South game.

Duncan was the colony's outstanding exponent of kicking the ball.

(The History of The Carlton Football Club, Brian Hansen p 13,17.)

1869 Scored the only goal (and score) against Albert Park June 26 Emerald Hill.

1870 Played in the Challenge Cup match against Albert Park, June 18 at Royal Park.
The ground was inches deep in slush and ended in a draw.
(The Carlton Story, H.Buggy and H.Bell p17,19.26)

1870 J. C. Duncan and Jack Conway were Carlton representatives in the drop kicking competition, part of the Winter Athletic Sports held on Separation Day at the M.C.G. on Friday 1st. July.

1871 Listed among the players for this year.

1876 J. Duncan went to Albury to take up a position as a medical doctor.

1880 Former Carlton player Dr. James C. Duncan of Albury is named in the Australian Town and Country Journal July 25 (p35) as the writer "True Blue."
Someone had used the name "True Blue" in a letter to the paper deriding Australian Football . "Orange and Blue" aka Tom Power jumped to Duncan's defence to point out that the writer was not James C. Duncan.

1880 Argus May 05 (p8)
Funeral Notice
The friends of the late Mr. JAMES DUNCAN, builder, are respectfully invited to follow his remains to the place of interment, Melbourne General Cemetery.
The funeral will move from his late residence, Dalmarnock-cottage, Cardigan-street, Carlton THIS DAY, 5th inst. at half past 3 o'clock.

1881
Dr. James Duncan was travelling by train to Melbourne. He was dozing in the carriage when he was awoken by two men, "armed with the moral authority of the law" who dragged him roughly from the train to the platform where he received a blow to the head. He had been mistaken for a forger who the authorities were looking for. When the Albury Banner of November 18 (p12) reported this incident Duncan had not fully recovered. Perhaps this contributed to his early death?

1882 March 10
"We regret learn that Dr. Duncan, who was attacked by illness a few days since, still remains in a precarious condition."
(Albury Banner and Wodonga Express p13)

1882 April 22
Duncan has recovered and returned to his practice.

1883 April 29
Death of Dr. James Campbell Duncan aged 39 years, after a short illness at his residence in Dean Street Albury.

The Franco-Prussian war was 19 July 1870 - 10 May 1871 in which France was defeated. The Prussian victory resulted in a united Germany.
It seems that Jim was still in Australia during in this war period. Perhaps he travelled to Europe between 1871 and 1873 to help in the medical operations on the wounded? 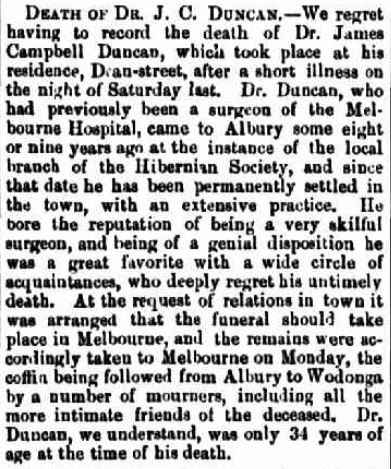 The Melbourne Hospital was in Lonsdale Street, it later became the Queen Victoria Hospital.
Trove; Albury Banner and Wodonga Express May 04 (p13) 1883

1883 August 10
The Albury Banner and Wodonga Express (p10)
Wodonga Shire Council - Board of Health
"Dr. Cleaver Woods, whose name has been submitted by the local board as medical officer in succession to Dr. Duncan deceased, did not appear on the Victorian medical list."

1923 Argus June 11 (p1)
Death Notice (this reproduction in Trove is very difficult to read)
Duncan
"On the 10th of June, at her residence, "Dalmarnock," 406 Cardigan Street Carlton. Mary, widow of the late Dr. James C. Duncan, late of Melbourne and Albury."
So Mary, a widow for over 40 years, lived at the Duncan's family home in Carlton.