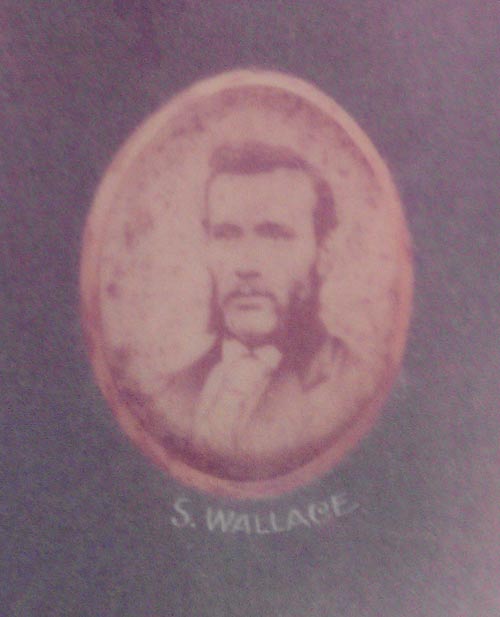 
Sam Wallace (above) appears in a group collection of Carlton players who were the 1871 Challenge Cup winners.

1871 Wallace played in a Carlton Second Twenty match against Carlton United
in a 15-20 aside game at Royal Park, Saturday 26th August.

'The Footballer' wrote about the Carlton 1875 premiership side,
"..........George McGill and Wallace have shown better form than ever."
(The History of The Carlton Football Club, Brian Hansen p30)

Annual General meeting April 23 1875.
As was the custom in those years illuminated addresses were presented to top star players Billy Monie, Jack McHarg, S.Wallace and J. Blanchard in appreciation of their services during season 1874.
( The Carlton Story, H.Buggy and H.Bell. p33)

1875 The Argus named Wallace in a Carlton First Twenty side to play against a Carlton 25 in a scratch match at Royal Park on Saturday 8th. May.

1875 One of the heavy brigade, and a splendid worker, possessed of great pluck and endurance, and not easily shaken off.
(The Footballer. 1875. p27)

By 1878 Sam Wallace was captain of South Adelaide.

1879 June 24
The South Australians gathered at Jackman's restaurant prior to travelling to Melbourne.
Various toasts were made and S. Wallace proposed at toast to the South Australian Football Association which was responded to by another former Blue, Billy Dedman.
Another former Carlton champ Alf McMichael captained the Croweaters.

1886 The Australasian reporting on South Adelaide's visit to Melbourne, mentions that the club was founded by former Carlton players S. Wallace and George D. Kennedy

1926 June 11 p14
Sport, an Adelaide newspaper, wrote about the players of the South Adelaide team of 1877.
Sam Wallace, a grand back, hard to pass splendid kick, shows no sign of falling off with increasing years, one of the best place-kicks in the colony."