Best remembered for his infamous clash with John Coleman that arguably cost the Bombers the 1951 flag............

In contrast to the way that the careers of Fred Stafford and Ted Hopkins were defined by their exploits in famous Grand Final victories by the Blues, Harry Caspar is remembered as the man who cost Essendon the 1951 Premiership. In a famous incident, Harry provoked the Bombers’ champion full-forward John Coleman into an altercation on the field during the last home and away round of that year. Having traded punches, both men were reported, and subsequently suspended for four games each. A month later, Essendon would surely have won their third straight flag had Coleman been in their side. But he wasn’t - and the Bombers lost a hard-fought Grand Final to Geelong by 11 points.

In the years since those sensational events, Caspar has been widely vilified, especially by Essendon supporters. Some have described him as a football thug, with little or no talent – but that is patently nonsense. Sure, Harry was tough, aggressive, single-minded and ruthless. But his record shows that he was also quite skilful, and a worthy VFL player.

Originally from Sorrento, Caspar later joined VFA front-runners Northcote, where he developed into a pack-busting follower-defender. The Blues were very keen on recruiting him in 1947, but the Brickfielders wouldn’t let him go. That decision was well and truly justified over the next few seasons, because Harry won Northcote’s Best and Fairest in 1948, and finished runner-up in ’49. Carlton kept pursuing him, and after 66 games in Northcote’s green and gold, he was eventually cleared to play with the Blues in 1950.

During his first two seasons at Princes Park, Caspar didn’t miss a game. Used in a variety of positions, he was particularly effective as a second ruckman, resting in a back pocket. He shared a good understanding with Carlton’s star full-back Ollie Grieve, and before long was Ollie’s ‘minder’- always ready to hand out retribution to any opponent who tried to unsettle Grieve - or any other Blue for that matter.

On Saturday, September 1, 1951, seventh-placed Carlton hosted Essendon (third) at Princes Park in the last round of the season. There was little at stake except pride for the Blues that afternoon, while the Bombers were still in with a chance of unseating Geelong from second spot if they could roll the home side by a big margin. Essendon’s trump card was their brilliant full-forward John Coleman, who was aiming for his third consecutive Premiership, and this third 100-goal season in a row. Coleman ran out onto Princes Park on that fateful Saturday with 68 majors against his name from 15 matches – as well as a painful boil on the back of his neck.

During the second quarter, Coleman already had three goals and Essendon were pulling away, when Caspar - either deliberately or inadvertently, depending on your allegiance - made heavy contact with the back of Coleman’s neck in a marking contest. The Bomber champ understandably reacted by turning, and throwing a flurry of punches. Caspar retaliated and gave as good as he got, but in the aftermath, both players were reported.

On the following Tuesday night, amazing scenes ensued outside VFL headquarters as hundreds of Bomber fans waited anxiously for the tribunal to consider the charges. Essendon pleaded extreme provocation on Coleman’s behalf, while Carlton claimed that Caspar was only defending himself from a concerted attack. Neither claim was accepted, and both players were suspended for four matches. Among Essendon supporters, anger and disbelief were the order of the day. In a memorable newspaper photograph of the time, the Bomber star was shown in tears, surrounded by a horde of distraught fans. And there was even more grief a few weeks later, when Essendon lost the Grand Final to Geelong by 11 points. Few would argue that John Coleman wouldn't have made the difference in that match, and VFL history will forever link Coleman with Caspar, and Harry’s part in denying the Bombers a Premiership they seemed to have had at their mercy.

After serving his suspension through the first four games of 1952, Caspar was brought straight back into Carlton’s senior team. He celebrated his 50th match in round 18 (a 36 point win over St Kilda at the Junction Oval) and played in the first and only senior final of his career when the Blues lost a heart-stopping Semi Final by l point to Fitzroy in front of 18,000 fans at the MCG. In a dramatic post-match incident later that evening, Carlton’s promising full-forward Keith Warburton collapsed and was rushed to hospital, where only repeated blood transfusions over the next 24 hours saved his life. One of Keith’s kidneys had been ruptured in a heavy collision during the game, but he somehow stayed on the field until the final siren.

That dramatic final marked the high point of Harry Caspar’s career at Carlton, because soon afterwards, his career went into decline. Injury delayed the start of his 1953 season, and he had added only four senior games by round 9 when he apparently became embroiled in a dispute with his captain, Ken Hands, or his coach Percy Bentley. As a consequence, Caspar spent the second half of the year with the seconds. In September, he was influential in driving his team right through to the Reserves Grand Final, and the Blues comfortably beat Essendon in the curtain-raiser to the Collingwood-Geelong Grand Final at the MCG. 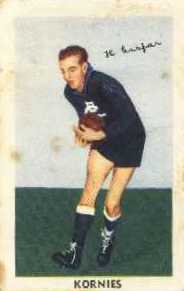 Despite that success, Harry’s problems continued into 1954. On the first day of the new season, Carlton Reserves unfurled their Premiership flag at Princes Park prior to the match against South Melbourne. Early in the game, Caspar and the Swans’ captain-coach Don Condon tangled, and Condon was reported. Then at half time, Harry became involved in a heated discussion with Carlton officials, and shocked everyone by demanding an immediate clearance and leaving the ground.

Caspar spent the 1954 season playing for Sorrento on the Mornington Peninsula.

Carlton stood firm however, and Caspar eventually returned to the fold – and to senior football - in 1955. Wearing guernsey number 6 (after playing all of his career to that point in number 24) he was one of Carlton’s best in a big loss to Essendon in round 9, before his career imploded in less than ideal circumstances the following week. In the midst of another big defeat – this time by Footscray - Caspar was reported for striking the Bulldogs’ Dave Bryden. And to make matters worse, he suffered a badly-bruised back during the last quarter. On the following Tuesday night, Harry was suspended for four weeks, and that brought the curtain down his career. He retired on the spot, and didn’t play again at any level.

In 1956, Caspar headed off to play for East Ballarat that had just appointed his former team-mate John Brown as coach for the 1956 season.

In the years after his last match for the Blues, Harry returned to live at Sorrento, where he and his wife produced five sons. All of the Caspar boys represented Sorrento at some time in their sporting careers, and two went on to play at VFL Reserves level; Michael with South Melbourne in 1980, and David – remarkably, with Essendon in 1984.

Footnote
Monday, 19 April, 1954.
Carlton Reserves unfurled their 1953 Premiership flag at Princes Park against South Melbourne. Caspar was selected in the back pocket.
It was reported that at half time, Harry Caspar - after discussions with club officials - took off his guernsey, dressed, and left the ground. He said he will be seeking a clearance. Also during this game, South Melbourne's reserve coach Don Condon was reported for striking Caspar.