Lachlan James "Lock" Bracken recruited from Parkside in 1872, and before that he played with Royal Park Academy.
He scored 1 goal during the 1872 season.

1876 Crossed with his brother W. 'Billy' Bracken from West Melbourne.

1877 was member of the Carlton touring side to play against Waratah Club in N.S.W.
(The History of The Carlton Football Club, Brian Hansen p32,37)

1877 One of the leading players.
(Centenary Souvenir of Carlton football Club p13)

1876 as Captain of the 'Alberts', did not shine, and came back to his old club again, has shown excellent qualities forward, marks well, and from place kicks pilots the leather between the sticks with unerring accuracy.
(The Footballer. 1876. p34)

1877 A valuable forward; capital mark, and unerring place kick, has played well against strong opposition; over anxious at times for the general weal.
The Footballer. 1877 p35)

1878 In play has fallen off greatly, but is still determined, and at times did fairly; as a forward has lost much of his cleverness in marking and kicking.
(The Footballer. 1878. p31)

L. Bracken played in the Carlton-Waratah, (Australian Football- 20 aside) game 1 July 1878.
He did not play in the Rugby game on June 29.

..... "When the game first established (in the "Richmond Paddock" towards the concluding "fifties") the distance between the goals was usually between 300 and 400 yards, and the width of the playing space in due proportion.
Some years afterwards, when a proper code of rules were framed by Delegates B. Goldsmith and L.W. Bell of Melbourne, S. Wallace (who is now in Perth), and T. P. Power (Carlton), M. McDonald and L. J. Bracken (Albert Park), A. Hastings and J. McIndoe (North Melbourne), G. L. Skinner and H. Jennings (St.Kilda), and G. Down (Geelong), the first rule read as follows: -
"The distance between the goals shall not be more than 200 yards, and the width of playing space (to be measured equally on each side of a line drawn through the centres of the goals) not more than 150 yards. The goal posts shall be 7 yards apart of unlimited height."
This was written by former pioneer Carlton player George F. Bowen alias "Nunquam Dormio" of The Inquirer and Commercial News (Perth) p13.

1910 April 29
"Old Carlton footballers received a shock a few days ago when it became known that Mr. L. Bracken who dropped dead in Elizabeth Street Melbourne recently, was the "Loch" Bracken who used to play for the old Blues in the days when Jack Donovan, Billy Dedman, Jack Gardiner, etc., were powers on the field." (The Herald p2)
Death Notice April 23 in The Herald (p5), looks like he was 56 years (very difficult to read) Trove's auto transcription says 36 years, which would put his birth as 1874, far too young. 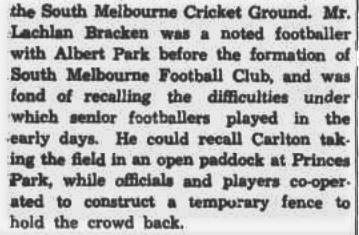