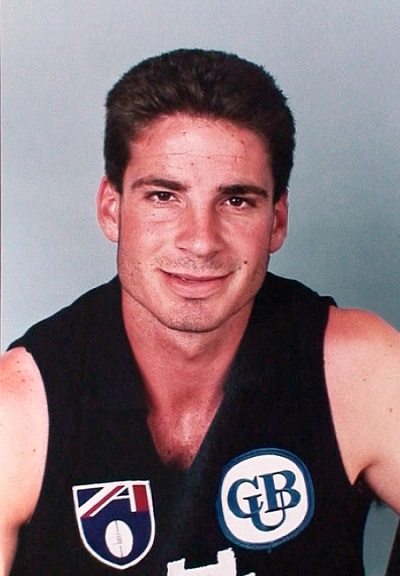 A pacey utility who was traded to the Blues by North Melbourne in 1991, Ron De Iulio eventually played 104 senior games for Carlton in an 8-year stay. He had been an outstanding soccer player during his early teenage years, but at the age of 16 Ron realised that he preferred playing Australian football. Three short years later, he walked through the doors at Princes Park to join the Blues.

When he made the decision to switch codes, De Iulio began his conversion with the Brunswick Football Club. Starting with the Under-17 team, he progressed through play senior football, before defecting to Box Hill when Brunswick ran into financial troubles and were unable to pay their players on time. At Box Hill in 1991 he was awarded the Round-Fothergill Medal as the most promising Under-21 player in the competition, which prompted North Melbourne to draft him.

However, De Iulio had not even trained at Arden St. before the Shinboners traded him to Carlton in exchange for 1987 Premiership player Richard Dennis. The Blues gave Ron guernsey number 34, and an opportunity to impress by including him in the team that played the Brisbane Bears at Carrara in the opening round of 1992. Stationed on a half-forward flank alongside Earl Spalding and Tom Alvin, De Iulio gathered 12 possessions and kicked 1.3 as the Blues won by four goals. Three weeks later, Ron began to get Blues fans excited when he kicked five goals in a 15-point victory over North Melbourne on a Friday night at the MCG, and at the conclusion of his first year with the Blues he had booted 29 goals in 19 games.

Unfortunately. the “second year blues” plagued De Iulio in 1993, restricting him to 12 games as the first signs of the inconsistency that would dog him for the rest of career appeared. Ron was part of history in September of that year, when Carlton and Essendon met in the first Qualifying Final ever played under lights. The Blues won a thriller by 2 points, then followed up by accounting for Adelaide in a tough Semi Final. But De Iulio gathered few possessions in either game and was omitted from the Blues’ Grand Final line-up.

It was a similar story in 1994. Ron’s confidence seemed to evaporate for long periods and he spent much of the season playing Reserves football. Then early in 1995 he badly damaged one of his hands in a workplace accident, restricting him to only three senior appearances and putting his future at Carlton in real jeopardy. That was when assistant coach Wayne Brittain stepped up and convinced Carlton’s match committee to give De Iulio a place in defence, at the same time stressing to Ron that it was his last chance.

De Iulio responded with renewed enthusiasm, training harder than ever before and justifying Brittain’s faith in him to play 21 games as a free-running half-back. Knee and lower back strains restricted him to eight games in 1997, but he recovered well to have another fine season in 1998 and celebrated his 100th game with a huge win over Collingwood at the MCG in round 17, 1999.

Ron’s last game for 1999 came in round 21 against St Kilda at Princes Park, when the Blues demolished the Saints by 10 goals after a second-half blitz. Despite that big win, De Iulio was omitted for the following week and wasn’t recalled for any of Carlton’s finals matches. He remained at the club in 2000, but spent the entire year in the VFL and was delisted at year’s end.