Sydney monstered the Blues by ten goals at Docklands, with Charlie Curnow on debut.

Although it’s never pleasant when your football team cops a 10-goal hiding, Carlton supporters were far from despondent after the Sydney Swans overwhelmed the Blues in this round 2 Sunday evening contest at Docklands. Fresh from a huge win over Collingwood in the opening round of the season, Sydney controlled this game throughout, thanks to their battle-hardened midfield, dominant ruckmen and two of the game’s biggest and best key forwards in Lance Franklin and Kurt Tippett. However, Carlton was by no means disgraced. As they continued to adapt to coach Brendon Bolton’s game plan, the young Blues showed refreshing audacity at times, and were resolute all match. Four “posters” didn’t help their cause.

Carlton made two changes to the team for this first “home” game of the season, bringing back Dale Thomas after a long absence through injury, and unveiling 19 year-old key position prospect Charlie Curnow – the clubs’ number 12 selection in the 2015 AFL Draft. Omitted were Sam Rowe and Dylan Buckley, although Rowe earned a late reprieve when Andrew Walker withdrew shortly before the late afternoon start time. Adding to the occasion, two of the club’s most popular players reached milestones, with Zach Tuohy chalking up 100 games and Sam Docherty reaching 50 AFL matches. Both performed well in front of a crowd of 33,000. 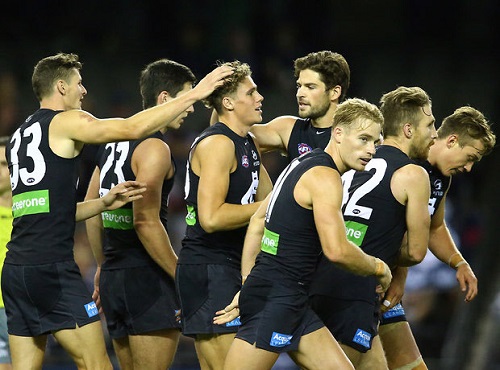 After Tuohy won the toss and Matthew Kreuzer won the opening ruck duel, the first eight minutes of play belonged to Carlton, and to Sam Kerridge. The Blues’ midfielder set up the opening goal of the game with a lovely long kick to Levi Casboult, who goaled from 45 metres. Sam then earned a free-kick himself and split the posts to put the Blues 11 points up, but ten minutes in, the Swans clicked into gear and began to take over the clearances. Their recruit from West Coast, Callum Sinclair, started to win the aerial duels and their height in attack became a real concern. Late in the quarter Sinclair kicked his second major and Tippett added another to put Sydney in front, before the Blues launched a length of the field attack that culminated in an excellent running goal to Bryce Gibbs. At quarter-time, Carlton trailed by 8 points.

The second term began with the alarming sight of 185 cm. Sam Docherty matched against 197 cm. Franklin deep in Sydney’s forward 50. Carlton captain Marc Murphy, Kade Simpson, Ed Curnow and Thomas were burrowing in hard for the Blues, while Pat Cripps found himself a marked man. Sydney had decided to wear down Cripps with constant physical pressure, and the youngster was up for the challenge. Swan Tom Papley put his team 15 points up with an early goal, then Kreuzer benefitted from a 50 metre penalty to reply for the Blues. In 25 intense minutes of football, Blaine Boekhorst and Cripps both hit the post with gettable shots before Sydney slammed through three goals in six minutes to break away by 38 points. Right on the half-time siren Tuohy and Franklin grappled in Sydney’s forward pocket and the melee that erupted took quite some time to clear.

The third quarter began with the Carlton crowd applauding excellent defensive marks by Charlie Curnow and Jacob Weitering. Sydney kicked the first major of the term, but Murphy quickly replied for the Blues and Kerridge added another to cut Carlton’s deficit to 30 points. Thomas flashed into the gamer once more and could have given the Blues real momentum, but his shot from wide out on the boundary drifted away for a behind. Nick Graham missed too, then Franklin was awarded a 50 metre penalty against Tuohy and all Carlton’s efforts came to nought. A number of Blues seemed to tire in the last ten minutes of the term, and Sydney’s midfield got right on top. They pumped the ball forward incessantly, and their big forwards took full advantage, adding another three unanswered majors to lead by 45 points at the last change.

Sydney wrapped up victory early in the final quarter with goals to Franklin, Tippett and the unstoppable Josh Kennedy. Carlton’s disposal efficiency dropped to 65%, and turnovers increased. When Boekhorst staged for a free-kick and fooled the umpires, his goal reduced Carlton’s deficit to 58 points. Thomas lifted Carlton when he out-marked Franklin one-on-one, then Tuohy and Boekhorst streamed down the ground and Blaine’s pass found Charlie Curnow charging out on the lead. Charlie’s set-shot from 30 metres sailed through for full points, and the youngster was mobbed by every Blue in the front half of the ground. Andrejs Everitt kicked the Blues tenth goal in time-on, before Tippett brought up his fourth for the match in the last minute to make the final margin an even 60 points.

In the end, it was Sydney’s three big men; Franklin, Tippett and Sinclair who won the match by kicking eleven of the Swans’ 20 goals. However, their midfielders Mitchell, Parker and Hannebery were clearly the three best players on the ground. For Carlton, Simpson, Ed Curnow, Thomas, Tuohy, Docherty and Murphy stood out. Weitering’s composure provided a beacon of hope, while Charlie Curnow seemed comfortable and eager for the contest.