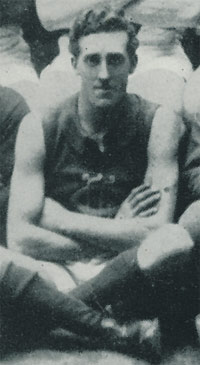 Edward Valentine (Ted) Brown was a gritty centreman/defender in consecutive Premiership teams for the Blues during the grim years of World War One. At his best on big occasions, he played finals football in each of his seven seasons at Princes Park.

Born in Bendigo, but raised in Ballarat, Ted learned the skills of Australian football as a youngster with South Ballarat. Later, he moved down to Melbourne to play with Caulfield Juniors, where his potential was recognised by an invitation to join St Kilda. Aged 19, Ted played four games for the Saints in 1911, but couldn’t command a regular place in their senior team.

In 1914, he was convinced to try his luck again at the elite level, and joined the Blues. Wearing guernsey number 2, Brown played in the centre in his first senior match for Carlton against Collingwood at Victoria Park in April. He did well as one of six debutantes on a remarkable day when the Blues had ten more scoring shots than the Magpies, yet could only settle for a draw.

In fact, inaccuracy in front of goal plagued Carlton throughout the year, making winning matches a harder task than it should have been. Even so, the Blues finished the home and away rounds as minor premiers. But on the eve of the finals the usual keen anticipation among players and fans was derailed by the grim news from Europe that Australia, as part of the British Empire, had declared war on Germany.

In September, while Australians everywhere began volunteering for active service in support of the mother country, Ted Brown played on a wing in Carlton’s fighting 6-point Grand Final triumph over South Melbourne. It was Carlton’s fourth VFL Premiership. Blues’ captain Billy Dick was widely acclaimed as the outstanding player of the match, with tough defender Paddy O'Brien, and Brown vying for next best afield.

The first matches of season 1915 began just hours before Australia’s, (and New Zealand’s) baptism of fire on the shores of Anzac Cove. By then, the war had already had a dramatic impact on the local game. Attendances were down, and all clubs were finding it hard to field strong teams as the cream of Australia’s sportsmen were called into uniform.

Having enjoyed the relative freedom of the wing in his debut season, Brown was sent to a half-back flank early in his second year, and adapted superbly. When Carlton claimed a fifth VFL Premiership by 33 points over Collingwood in the 1915 Grand Final, Brown controlled his position all day to be named among the Blues’ most valuable players for the second year running.

Just four teams; Carlton, Collingwood, Richmond and Fitzroy, made up the VFL competition in 1916, with each team playing the other three times in a 12-round season. For the third year in a row, Carlton contested the Grand Final, and for the third consecutive time, Ted Brown was there when it counted most. Fitzroy proved too good for the Blues to the tune of 29 points, while Carlton’s new centreman Jimmy Morris, half-forward Percy Daykin and defender Brown gave their all for their team.

That was to be the last Grand Final for Ted Brown, but by no means his last finals appearance. As the strategic balance of the conflict in Europe began to tilt in favour of the Allied nations, and more teams returned to the VFL, the Blues were finalists once more in 1917, 1918 (the year the war ended at last), and 1919. On each occasion we were knocked out in the semi-finals, and invariably Ted Brown was among the Blues’ best.

In his second year, Ted had switched to guernsey number 9 after 20 matches in the number 2. His 75th game in number 9 – against South Melbourne at the Lake Oval on May 26, 1920 – was to be his last. Ted finished his career back on the wing as the Bloods sent him off with a 19-point defeat, but his individual record against them over his career entitled him to have the last laugh.

Almost twenty-one years later – on May 17, 1941 – Ted’s talented son Vincent (Vin) Brown would emulate his father by starting a fine career with the Blues. Like his dad, Vin would play much of his career during wartime and be an integral part of two Premiership teams for the Old Dark Navy Blues.

The Ararat Advertiser, October 3 1914, mentions that Ted Brown was formerly of Ararat.
Talking about his efforts in the premiership it said;
"Brown's performance on Saturday was highly meritorious. His marking, and speed were exceptional, whilst his dash was that of a deer. He was often cheered to the echo."

The Ararat Advertiser, July 3 1915, mentions that it rumored that E. V. Brown formerly of Ararat, may leave Carlton and return to the South Ballarat club.

Traralgon Record April 18 1924;
"E. V. Brown, a former Carltononian, but latterly skipper of the Yarragon team, was last week appointed trainer to the Maffra team. Brown expects to have the players well in hand before the first bounce on 3rd. May."

Gippsland Times March 29 1929;
"Traralgon Football Club has appointed E. V. Brown coach at £3 per week. There was only one application for the position, Mr. Brown first started his football career at Ballarat. From there he graduated to the Carlton team. He was one of the "stars" of that team. Later he became coach to the Yarragon team, and a few seasons ago he was appointed coach of Maffra. Last year he donned the guernsey and helped the Second eighteen."