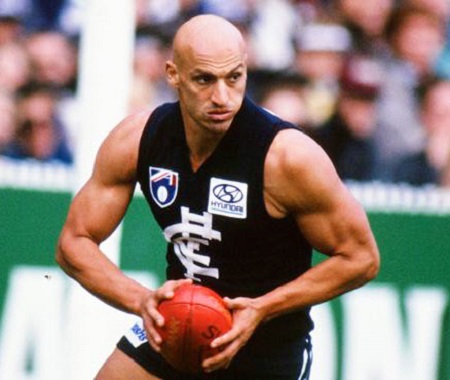 Simply called “Mil” or “The Cranium,” Milham Hannah was the first Lebanese-born player in the VFL/AFL, and a cult figure at Carlton during a celebrated eleven-season career from 1986 to 1997. Wonderfully athletic and equipped with a powerful physique, Mil had been affected by a condition called alopecia at a very young age. As a consequence his hair was already thinning by his teenage years, so he shaved his head soon after making Carlton’s senior team, and that made him unmistakable on the football field.

After arriving in Australia, Hanna’s family settled in East Brunswick, the suburb immediately to Carlton’s north. Mil came to love the local code of football in primary school, and by his early teens he was regarded as a future star. In 1982 he was playing Under-19 football at Carlton, the year before he represented Victoria in the Teal Cup Interstate Carnival and was selected as an All Australian. Promoted to the Blues’ Reserves team in 1985, he made a big impression playing as a ruck-rover or half-forward. After helping drive his team through to a losing Grand Final against Hawthorn, he was awarded Reserves Best First Year Player.

In 1986, Hanna completed a solid pre-season preparation and was named for his senior debut against Hawthorn in the opening round of the season at VFL Park. Playing at full-forward in guernsey number 47, he took a good mark inside the first minute of play, but his set-shot for goal just missed. Just a few minutes later after leading for a mark Hanna left the field with a footballer’s worst nightmare – a torn anterior cruciate ligament.

After surgery and a long recuperation, Hanna earned a recall to the Blues’ seniors in round 7, 1987, when Carlton travelled out to Waverley once more to meet Geelong. Mil had switched to jumper number 13 by then, and would wear it for the rest of his career. At half-back alongside Jon Dorotich and Shane Robertson, Mil played a solid game to collect 15 possessions and two marks as the Blues trounced the Cats by nine goals. A week later at the MCG, he kicked his first career goal in Carlton’s big win over North Melbourne. By mid-season he had played eight games before his form tapered off, so he was sent back to the Reserves to freshen up. Unfortunately, he wasn’t able to force his way back into a powerful Carlton combination that went on to claim the ’87 flag, so he had to be content with his role at half-back in the Reserves Grand Final victory over St Kilda. 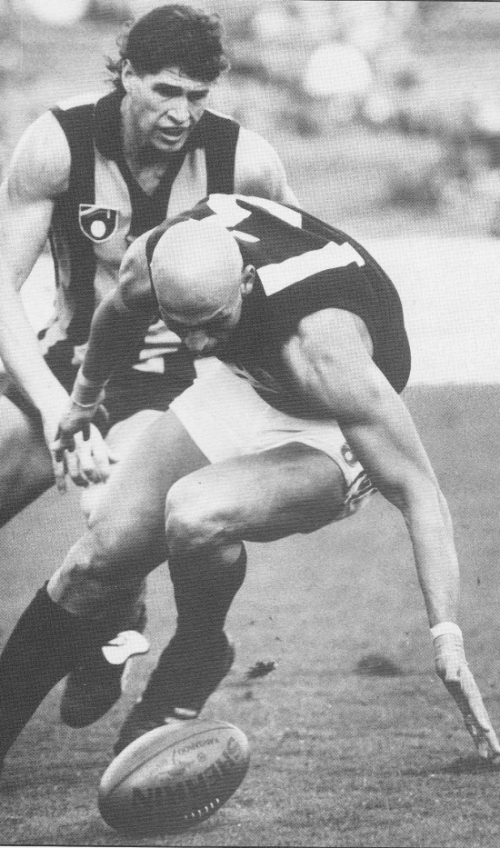 Determined to get back into the senior team, Mil worked intensely on his strength and aerobic fitness in 1988, playing 16 senior games including consecutive finals losses to Hawthorn and Melbourne. Over the ensuing three seasons he developed an imposing muscular frame that, combined with his natural speed, produced a tall utility who could play anywhere on the ground. In round 4 1991, he kicked 8 goals at full-forward against Melbourne at Waverley, yet the Blues still lost. A month later, Carlton went down to Hawthorn at the same venue, despite Hanna’s excellent 29-possession game on centre wing.

Mil brought up game number 100 in round 15, 1992 against Richmond, then savoured the thrill of running out to play alongside Greg Williams and Brett Scholl in his first senior Grand Final against Essendon the following year – although that occasion quickly turned into a disaster. Early in the second quarter, Hanna was hit high by the forearm of Bomber Dean Wallis, and all but knocked unconscious. The field umpire didn’t even award a free-kick, and with Hanna off the field for most of the game, the Blues were eventually beaten by 44 points.

Twice more after that - in round 4, 1994 and round 10, 1995, both times against Hawthorn – Mil posted five-goal hauls, before he reached the pinnacle of his career when Carlton brushed aside Geelong to take the ’95 Premiership. In the most emphatic of Grand Final victories, the Blues’ centre line of Hanna, Brett Ratten and Anthony Koutoufides reigned supreme in a 10-goal triumph over the Cats. Hanna's brilliant opening quarter is fondly remembered, as he scorched the outer wing and delivered beautifully to Brad Pearce for a special goal amid Carlton’s early onslaught. It was game number 172 that afternoon for Mil, and he must have thought that he could go on forever.

That was not be however, because a series of chronic soft tissue injuries began to plague him from 1996, and he added only another 18 games before his retirement at the end of the 1997 season. Still the club record holder for games played in the “devils number,” Hanna was inducted into the Carlton Hall of Fame in 2016.

Articles: The Longest Roads to Glory | Triumphs & Tribulations of a Blue Debut