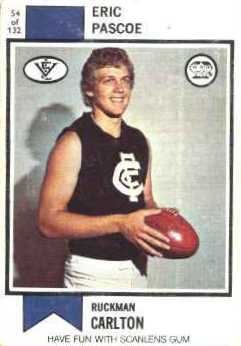 When 18 year-old Eric Pascoe arrived at Princes Park in the early 1970's many Blues supporters were convinced we had another star in the making. At 191 cm and 91 kg, the powerfully-built blonde ruckman was recruited from the Northern United Football Club in Bendigo - another product of Carlton's lucrative central Victorian recruiting zone.

Carlton intended that Pascoe be groomed as an understudy to the Blues’ regular ruckmen John Nicholls and Peter Jones, to ensure that there was always a capable alternative on hand. In fact, the club kept faith with Eric for five seasons, but he was never able to properly seize the opportunities offered by a very strong team.

In the absence of ‘Percy’ Jones, Pascoe made his senior debut for the Blues against Geelong in round 6, 1972 at Princes Park; a match perhaps better remembered as the debut game for future Premiership defender Rod Austin. Wearing guernsey number 13 (which was to bring him no luck at all) Pascoe shared the ruck duties with his captain-coach Nicholls, and kicked his first career goal as Carlton destroyed the Cats by 49 points. Although it was a handy effort first up, Jones was an automatic inclusion the following week, and Pascoe didn’t play for the seniors again until the next season.

In 1973 he managed another seven matches, and his development seemed to be on track when he won Carlton’s Reserves Best and Fairest award. The problem was that Nicholls and Jones were still playing very good football. Late in that season, Pascoe was tried as a key forward, but pace proved a problem. First and foremost, Eric was a tap ruckman.

Eventually, the opportunity Pascoe had been waiting for arrived when John Nicholls retired in 1974. However, the club had not been idle on the recruiting front. While Eric looked forward to the chance to fill ‘Big Nick’s’ boots, Carlton announced the arrival of boom WA ruckman Mike Fitzpatrick. ‘Fitzy’ was a star from his first game for the Blues, and suddenly, Pascoe was relegated to a back-up role again.

In 1976, a new coach in Ian Thorogood and a new guernsey number (44) lifted Pascoe’s hopes. He sat on the bench as 19th man for the first two matches of the year, but was soon back to kicking the dew off the grass with the Reserves. Around that time - with Carlton’s approval - he was approached by Tasmanian club Clarence, who wanted him as their captain-coach for the following year.

After some thought, Pascoe accepted Clarence’s offer, and Carlton didn’t stand in his way when he asked for a clearance. He played his last match in navy blue off the bench against Melbourne at Waverley Park in July, 1976, on a blustery afternoon when the Demons had one more scoring shot than the Blues, yet lost by 57 points; 6.22 (58) to 18.7 (115).

Eric took over at Clarence in 1977, and spent two years at the helm, guiding the Tassie Kangaroos to sixth and fifth place respectively.

Pascoe wore guernsey No. 45 in 1971 whilst playing with Carlton reserves.