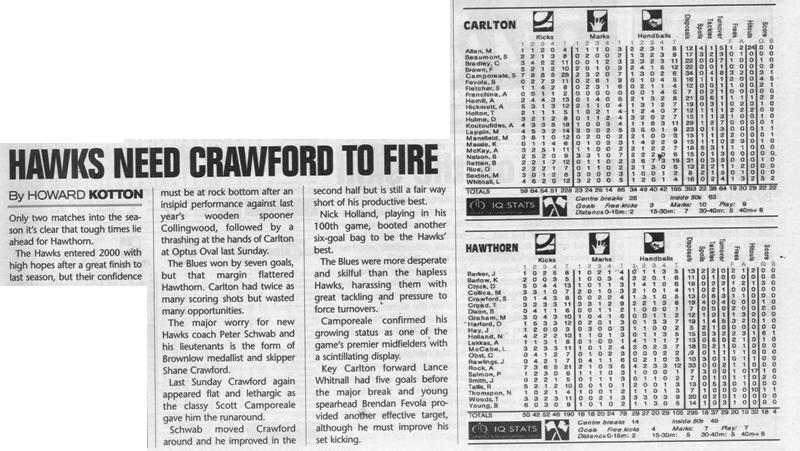 An unusual 12.10 pm start (so that the game could be broadcast on delay at 2pm) probably explains the low attendance of this clash. In any case Carlton easily rolled the Hawks in a high scoring affair.

Hawthorn started the game quite well with their main forward threat, Nick Holland, kicking 4 goals early on Michael Sexton. When Simon Beaumont moved onto Holland, his influence was curtailed (he finished with 6 goals) and the Blues surged ahead.

Carlton's midfield dominated with Craig Bradley terrific again, and the Hawks' 1999 Brownlow Medalist Shane Crawford was thrashed by Scott Camporeale, while Lance Whitnall was far too good for Trent Croad. Carlton’s winning margin could have been even greater if we had kicked straight, having 44 scoring shots compared to the Hawks 22. Young Brendan Fevola was a major culprit, scoring 1.5 in the third quarter.

A melee in the second quarter resulted in:

Hawthorn: Kris Barlow, Daniel Chick, Jonathon Hay and Angelo Lekkas were fined between $1200 and $2500 each. Paul Salmon and Tony Woods were found not guilty.