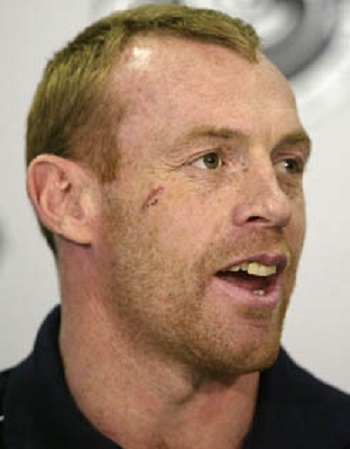 All too often, the football gods get it wrong, and the most worthy of players don’t get the success they deserve. One good example to consider is Adrian ‘Bluey’ Hickmott, a tough, honest and scrupulously fair red-headed utility who played in three Grand Finals for Carlton and Geelong during his 184-game career between 1992 and 2003, only to come away empty-handed each time.

Originally from the tiny hamlet of Noradjuha, near Horsham in Western Victoria, Hickmott was immersed in football from childhood. His father Morris coached the local juniors, while later on, his uncle Peter (who had played 69 games for Essendon and Footscray) later became the coach of the Horsham Demons in the Wimmera Football League. After winning back-to-back premierships with the Demons in 1989-1990, Adrian was recruited by Geelong, and duly won the Cats’ Under-19 Best and Fairest in his first year at the club.

In 1992, after an impressive season with Geelong Reserves, Hickmott made his senior debut for the Cats against Essendon in round 24. Remarkably, his second and third games were both finals, and he kicked his first career goal in Geelong’s Semi Final loss to West Coast. He played another seven matches in 1993 as the Cats faltered and fell out of the top six, then 20 more in 1994 as they recovered and made it through to their second Grand Final in three seasons against the Eagles. Adrian played at half-forward in his first flag decider, when he and his team were swamped by the West Australians and lost by 80 points.

With their freakish full-forward Gary Ablett in top form, Geelong qualified for another Grand Final in 1995, only to be smashed again – this time by a rampant Carlton team that dominated from the first bounce, and eventually won by 61 points. Hickmott, however, was one of Geelong’s better contributors that afternoon, and probably had the better of Ang Christou because he refused to drop his head and kept leading hard all day. The Cats’ big-name forwards were hardly sighted, but the determined redhead with number 42 on his back kept on bobbing up in his 50th game, and his pluck didn’t go unnoticed.

In light of that effort, Carlton’s match committee wasted no time when the surprising news broke during the off-season that Geelong had put ‘Hicky’ on the trade table. A deal was quickly brokered between Carlton, Adelaide and Geelong that saw Troy Bond leaving the Blues for Adelaide, Hickmott on the way to Princes Park, and the Cats happily pondering the potential of some extra draft picks.

At Carlton, Adrian was allocated the number 9 guernsey most recently worn by Brett Sholl and Stephen Edgar. Included in the Blues’ senior side for the first match of 1996 against Collingwood on a Sunday afternoon at the MCG, he was quietly effective in a 22-point win. From then on, ‘Bluey’ was an almost automatic inclusion for Carlton, and it didn’t take long for him to win over his new clubs’ supporter base with his honesty, courage and consistency. Happy to play anywhere on the field, Adrian filled roles at half-back, half-forward or in the centre, where his tenacity and steely concentration made him a difficult opponent for talls and smalls alike. He played finals football for Carlton in his debut year at the club, and was a popular choice as the Blues’ Best First Year Player.

After 22 games in 1996 and another 17 in 1997, a serious knee injury deprived Hickmott of the entire 1998 season. He came back to contribute more good football in 1999, before a hamstring strain kept him out of Carlton’s iconic victory over Essendon in the Preliminary Final. When the Blues named their team to take on North Melbourne in the Grand Final, ‘Hicky’ was included as one of two changes, but cruelly, his third flag decider produced the same result as before. The fitter and fresher Kangaroos were never really threatened, and crushed the Blues by six goals. 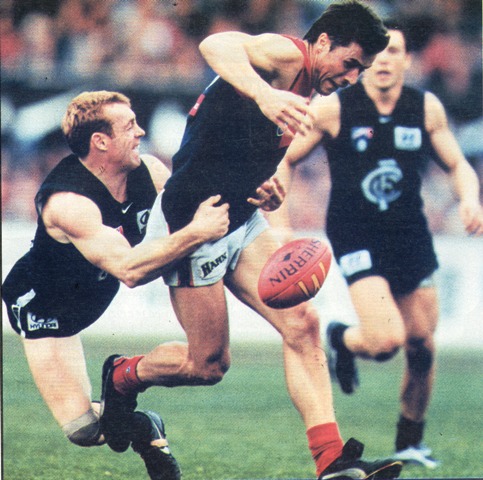 That Grand Final appearance was to be the last of Hickmott’s career, although he continued to play with the same courage and commitment for another four seasons. Indeed, there is strong evidence that the latter part of his career was his best, with the statistics making a strong argument. From 2000, Bluey played forward more often than before, in both offensive and defensive roles. He averaged almost 20 disposals per game over 2000-01, kicking 27 and 22 goals respectively. On a Saturday afternoon at the MCG in round 13, 2000, he kicked five goals in Carlton’s big win over Melbourne, and repeated the feat with another five in round 2, 2003, when Collingwood beat the Blues by 16 points under lights on a Friday night.

Throughout his time at Princes Park, Hickmott's courage, commitment and cheeky grin endeared him to his team-mates and supporters alike. He was voted Best Clubman in 2000 and 2002, and appointed deputy vice-captain in 2002-03, before his career was brought to a premature end during Carlton’s defeat by Sydney in round 16, 2003 at Princes Park. Hicky tore a groin muscle that had been troubling him for some time that afternoon, and so announced his retirement immediately after the game. In ten completed seasons of AFL football, he had averaged 18 games and 13 goals per year.

Straight after retiring from the AFL, Hickmott took up coaching, beginning as captain-coach of the Shepparton Bears in the Goulburn Valley Football League in 2004. After that he coached the indigenous team Rumbalara in the Murray Football League, before spending a year with the Gippsland Power in the national Under-18 competition. He then joined Essendon as a development coach in charge of the Bendigo Bombers in the VFL.

In 2011, Hickmott moved to Western Australia as the Colts coach and coaching manager at Swan Districts Football Club in the WAFL, and in 2013 put his name forward as a potential future AFL coach when he was appointed as senior assistant to Adam Simpson at the West Coast Eagles.