Carlton defeated Fitzroy by 20 points at the MCG.

"Fitzroy plunged into the action quickly enough. The starting gong, Hammond touched, Cooper centred, Norris and Holden forwarded, and Heaney steered it through the goal. After this they seemed to take a long breath, for Carlton did not linger over the moral aspect of the situation. Indeed, during the next quarter of an hour nothing occurred except the setting out of the blues on their victorious trail. Cook used his left foot, and the first sixer appeared. Green then raised the flags, and once again was Cook the instrument of Fitzroy's torture. The gong clanged with blues 3 to 1.
After an even second act the blues started the second half in pursuit of the red herring, and for the rest of the play, right up to the last moment, interest was concentrated upon the attitude of Carlton's forwards, for whom Cook was playing the star part. They made the game safe in the penultimate stage, which closed with the blues 30 points to the good. Try as the maroons did in the final act, twice only did they score sixers, although they had some nine scoring shots. Undoubtedly the better team won.
Once again the attendance less than normal. Under 30,000 attended to see a scraggy exhibition of football, the umpiring of which was the best feature of the day. Rawle has certainly made good as a knight of the whistle. Deaf or blind, onlookers could not fail to understand his decisions.
Andy McDonald gave Carlton a sterling exhibition of defence. Right through the piece he was a thorn in the side of the Fitzroy attack, and proved a champion. Baud did good work, punctuated with displays of ---? and Dick, though often in the limelight, gave slightly less than his best.
One of the finest players in the blue uniform was O'Brien, who, whether following or defending, showed surprising form. His influence was felt, especially in the second term and final stages of the tourney.
Two men exceptionally prominent in the first half were Brown and Fisher. The former (on the wing), though opposed to Holden, never failed to catch the good graces of the crowd, whilst Fisher's kicking proved a thing of beauty and a joy forever.
Scotty Lowe (half forward) was mighty useful, but Cook capped off the goal-getters with a quartette of the best. Wee McGregor (in the centre) was the hero of many dashing items, and much of Carlton's success was due to his master brain. Jamieson defended sternly.
Carlton's team possessed many first season players, all of whom have proved their worth; but it is doubtful if a better entry into senior football has been made by any than Morris. In this game the Tatura player capped his pervious performances, and,whether roving or forward, never allowed the plaudits of the crowd to overawe him."
(Melbourne Punch September 17 p41)

Carlton appeared to be the better side in a mediocre game, with the whole Blues side putting in for the club while Fitzroy relied on too few good players to keep them in the contest. The 20 point win was flattering to Carlton, though, as both sides had the same number of scoring shots.

The Blues had been dominant to this point, winning 12 matches in a row in a record winning streak for Carlton that would last for over 80 years.

The Blues "wore distinctive white sashes across their blue jackets", this was an early example of a "clash guernsey" to distinguish the dark navy blue from Fitzroy's dark maroon colours. In fact the Blues had worn the sash previously this season, Round 14, 1914, again, against Fitzroy on July 18.
Ten years before, Round 16, 1904 the Blues wore a sash against Melbourne.
See Guernsey History 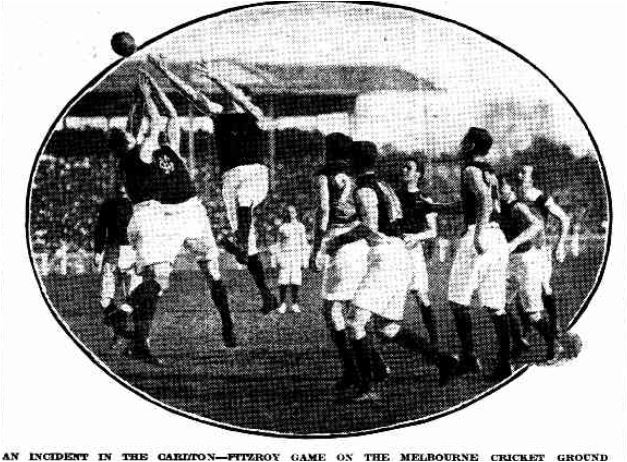 This photo from The Winner September 16 p5 (via Trove) threw some doubt on the "Clash Guernsey" being worn in this match. It is difficult to differentiate between the teams, it looked as though the sash was not on the front of the Carlton jumper. The player in the foreground could have a sash - there is something white under his left elbow above his shorts. But generally the sash ran in the opposite direction from the left shoulder down to the right hip.
Photos now found in December 2015 of these "sash games" show the majority of the Carlton sashes do run from the right hand shoulder to the hip - opposite to Essendon and Richmond's present day jumpers. In the earliest VFL film of Carlton v South Melbourne 1909 GF some of the South players have sashes running the other way.
December 2015: A different photo of this marking contest has now been found. The player with the CFC does not wear a sash. However the player on our left of him does.
Perhaps the missing sash was ripped off in a tackle? See below. 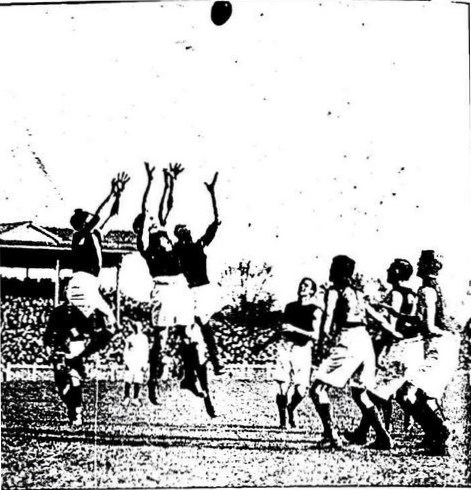 The same contest as above, taken a split second before; note the sash.
Image: Trove; Table Talk September 17

Score Records: This was our last of 12 successive wins, Carlton's equal third best winning streak ever