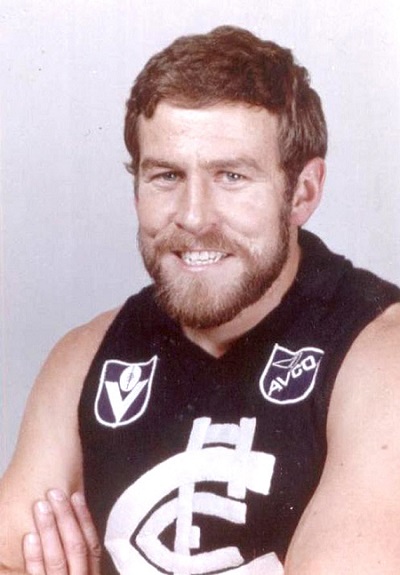 Another in a long line of courageous, reliable and tough back-pockets for the Blues, Des English was a valuable contributor in three Carlton Grand Final teams, including the 1981 and ’82 Premiership sides. One of the most respected players of his era, he was, sadly, forced into premature retirement when he was diagnosed with leukaemia.

English came to Carlton from Bendigo League club Eaglehawk in 1980, following in the footsteps of champion rover Rod Ashman. Like “Ashy”, Des had also won the Two Blues’ Best & Fairest award, and was a regular Bendigo League representative, usually at half-back. At Carlton he found a niche in the back pocket, and began consolidating his place in one of the league’s power teams.

Carlton finished the 1980 home and away season in second place, but lost both finals matches in successive weeks. It was a bitterly disappointing end to a bad year for the Blues, only compensated by the belief that this team was much better than its results might indicate. The core group at Carlton knew that they had the talent and the drive to win another Premiership – all they needed was the opportunity.

Under a new coach in David Parkin, that opportunity wasn’t long in coming. Carlton played brilliantly all season in 1981, topping the home and away ladder on percentage over Collingwood, then going on to beat the Magpies by 20 points on Grand Final day. The Blues’ defence, boasting the names Doull, Hunter, McKay, Harmes and Perovic, was topped off with the emergence of Des English. At 178 cm and 88 kg, Des was solid enough to handle any physical pressure, and tall enough to fill a variety of defensive roles. A safe mark, cool under pressure and an accurate disposer of the ball, he won new fans each week with his rock-solid consistency.

In 1982, Des won his second Premiership medal when Carlton triumphed again over their other traditional rival, Richmond. The free-scoring Tigers started warm favourites in that year’s decider, but with captain Mike Fitzpatrick supreme in the ruck, and Bruce Doull impassable at half-back, The Blues won their fourteenth flag by 18 points. Two Premierships in his first three seasons was a dream come true for English. The 26 year-old was in the best form of his life, and a fixture in one of the great football teams.

While still a powerhouse, Carlton went off the boil somewhat in seasons 1983, ’84 and ’85. The team still made the finals in all three years, yet couldn’t progress past the Elimination or Semi Final stage. In this era English was reported and suspended for the only time in his senior career, losing 2 matches in the Qualifying Final, 1984 for striking Hawthorn's Dermott Brereton. Meanwhile, Carlton's finals performances in these years spelt the end of his tenure for coach David Parkin, who was replaced by former Blues’ champion Robert Walls.

Walls’ equally demanding, yet less intense coaching methods clicked immediately with the Carlton list. Aided by some astute recruiting and trading of players, the Blues finished third after the home and away rounds, before winning both their semi-finals to set up a Grand Final showdown with Hawthorn. One of only six survivors from Carlton’s 1982 Flag side, English was named at half-back for the Grand Final, but spent just about all match in his customary spot on the last line. As always, he gave his all, but the Blues were overwhelmed by a great Hawthorn team that ran out easy winners.

Only a matter of weeks after that defeat, the Carlton Football Club was shocked to learn that English had been diagnosed with leukaemia, bringing a sudden end to his 104-game, 6-goal career in Carlton’s guernsey number 27. Immediately, the club, sponsors and supporters rallied around Des and his family. There was widespread determination to do everything possible to help a good mate get through his toughest challenge, while the coach and every player dedicated themselves to win another flag “for Des.”

Carlton kicked off season 1987 impressively, sitting second on the ladder after five rounds, when another blow sent the club reeling. This time, it was a major car accident involving emerging champion Peter Motley, who was critically injured when his car hit another head-on. Thankfully, “Motts” survived, but like Des, he had played his last game of League football.

That second tragedy bound the Blues tighter, and they swept into the ‘87 final series on top of the ladder. A hard-fought, 15-point Semi Final victory over Hawthorn followed, setting up a rematch with the Hawks on Grand Final day. Despite their previous loss, it was generally believed that Hawthorn’s stellar lineup would be too good for the Blues, but this proved not to be the case.

Fired by an impassioned pre-game address from coach Walls, Carlton kicked away to a handy early lead which was never seriously challenged, and ran out clear winners by 33 points in front of a crowd of almost 93,000 fans. Amid the jubilation and relief immediately after the siren, the Blues ran in a group to the players’ race to ensure that Des English and Peter Motley were among the first to hold the Premiership Cup. It was surely one of the most emotional of Grand Final moments.

Happily, Des’s condition went into remission in the months after that famous victory, and he was eventually able to resume normal family life. Still in robust good health, he is always a popular figure at team reunions and club functions more than 40 years after his last game.

Before switching to guernsey number 27, English wore No.54 throughout his 1978 season with Carlton Reserves.
In 1989, Des took up a role as a specialist coach at Footscray, under Mick Malthouse.