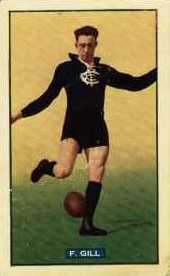 Regarded as one of the very best in an era of star full-backs, Frank Gill was a Carlton stalwart for 14 seasons. Recruited from Nhill in north-western Victoria, he began his league career with the Blues in 1929 and went on to play 205 games. Fearless and utterly dependable, his anticipation, strong hands and pace off the mark were his greatest assets, along with his booming long kicks to position. His favourite ploy was to dash out front of his opponent, then prop or push back just as the ball arrived. His superb judgement then usually resulted in a mark, or a free kick for a push in the back.

He was appointed club vice-captain in 1931. In 1932 he was selected in the Victorian state team, and was among Carlton’s best in the Blues’ Grand Final loss to Richmond. Largely because of his tireless efforts that day, he was made captain in 1933. His second Grand Final appearance came six years after the first, in 1938 against Collingwood. While Carlton went in as favourites, Collingwood were in hot form after crushing Geelong in a daunting Preliminary Final in which Collingwood’s gun full-forward Ron Todd kicked 11 goals. But in a typically hard, physical contest, the Blues triumphed by 15 points. Defenders Jim Park, Jim Francis and Frank Gill were all superb. Although Todd managed three goals, he was kept under a tight rein all day.

Carlton slipped to finish fifth in 1939, as Frank maintained his consistent form to win our Best & Fairest for the first time, aged 30. By then the war clouds were gathering over Europe, and the VFL went into decline as thousands of young men and women joined up. In a time when Carlton needed stability and experience, Frank was as durable and reliable as always until he, too, enlisted in 1942. He served throughout the war in various ordnance depots, and was promoted to Corporal before being discharged in June, 1946.

Frank Gill passed away in in June, 1970, and was posthumously inducted into the Carlton Hall of Fame in 1993.

Articles: Godfathers of the Goal Square | Every Picture tells a story - Signatures from 1935 | The Longest Roads to Glory