Son of Noel, and father of Lance... 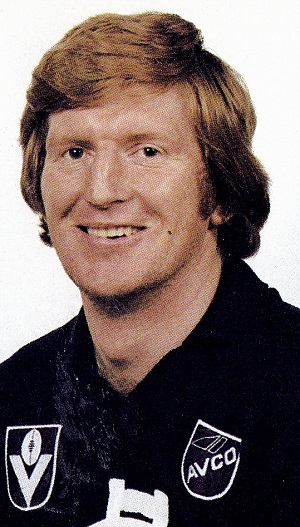 Graeme Whitnall hailed from Talbot, near Maryborough in central Victoria – a small town with a proud football history. His father Noel had played more than 200 games for the Talbot Hawks, including a winning Grand Final in 1965, and the club would later produce a Carlton Premiership player in Paul Meldrum. But while attending nearby Maryborough Technical School, 17 year-old Graeme was invited to train with the Maryborough club, and almost immediately was included in their senior side. At 19, he was voted Best and Fairest, and a year later, was a member of their senior Premiership team.

In 1973 Whitnall was recruited by Carlton, and got off to a good start when he picked up the Reserves Most Improved Player Award. In his second season he swapped from guernsey number 47 to number 7, and made his senior debut from the reserves bench in round 1, 1974 against Melbourne. He kicked his first two career goals against Collingwood in the next game, and after seven matches for the year, was a popular winner of Carlton’s Best First Year Player Award.

Graeme was a handy pickup for the Blues; a true utility who could play anywhere, but was most useful in the ruck-rover role. Unfortunately for him, he came to Princes Park at a time when Carlton was assembling a player list rich in similar types, including established stars like Barry Armstrong and Neil Chandler. Whitnall proved a handy addition, but couldn’t command a regular place in the side for an extended period. He averaged nine senior games per season over his career.

Graeme had his best year in 1977, when he and Ray Byrne were the only two Blues not to miss a game. Early in 1978 however, Whitnall and Carlton's newly-appointed captain-coach Alex Jesaulenko had a serious difference of opinion, and as a consequence, Graeme played only four matches for the year. He requested an open clearance (which was refused) so he returned home to Maryborough in 1979.

After winning the Magpies’ Best and Fairest for a second time that year (playing just 14 games) the departure of Jesaulenko from Carlton during the off-season brought Graeme an invitation back to Princes Park. He added a further 11 senior games during 1980 and 1981, in guernsey number 30, and in 1980 was judged Reserves Best and Fairest. He retired from VFL football in September 1981, after missing out on selection for any of Carlton’s senior finals.

Sixteen years later, Graeme’s strapping son Lance pulled on the famous Old Dark Navy Blue for the first time, at the dawn of a career that would bring him captaincy of the club, a Grand Final appearance in 1999, All Australian selection, the 2006 John Nicholls Medal, and over 200 games of AFL football. Lance's older brother Shane also played 40 Reserve-grade games for Carlton during 1996 and ‘97.

1907 Masthead for The Herald football section.