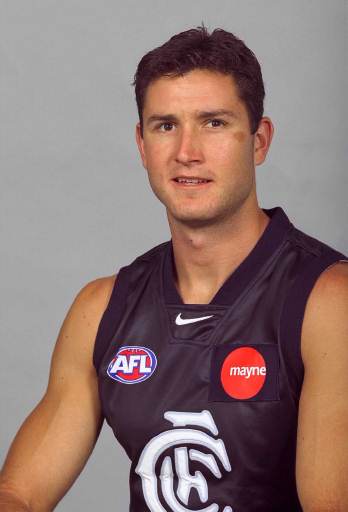 A wearer of the number 11 guernsey, Mark Porter was called up from the rookie list to replace the suspended Matthew Allan against Essendon in Round 16, 1997 and made a magnificent debut - routing his more experienced opponents from the very first bounce. The 199 cm Porter was an old-fashioned, blue collar ruckman who gave his all for the team. His running to create space and his hard work around the ground - he made 45 tackles in 2001 - provided an insight into the type of effort big Mark put in each and every game.

For most of 1998, he and Allan formed an excellent ruck combination - but from then on, it was rare for them to play together for any length of time. Usually, this was because one or the other was injured. After 19 games in 1998, Porter missed more than a season and a half due to an ongoing knee injury. In fact, he didn't make it back into the senior team until Allan himself hurt a knee in round 16, 2000, and was sidelined for six matches. In his absence, Porter stepped up to the role of number one ruckman, until the Blues' twin towers were reunited for the last four games of the year.

In 2001, Porter played all but two games, while Allan was restricted to just eight appearances by a nagging series of foot and groin problems. Overall, the pair only made it on to the field together on seven occasions. At the end of that year, Carlton - desperate for a marking forward - stunned virtually everyone by trading the reliable Porter for Corey McKernan from the Kangaroos. It wasn't a popular deal with the fans. Porter had won wide appreciation for his work ethic, and had battled hard to overcome injury. On top of that, Matthew Allan would play just 10 more games before he broke down again with foot problems. He was then traded to Essendon, and this left the Blues with severley depleted ruck stocks.

Porter went on to play three more honest seasons with the Roos, adding 55 games - the same number he had played at Carlton - before being delisted.

Carlton recruited Porter from VFA club Coburg, he had originally played for Wangaratta and King Valley.

Porter would win the Fothergill / Round Medal in 1995 it is presented to the most promising young talent in the VFL competition.