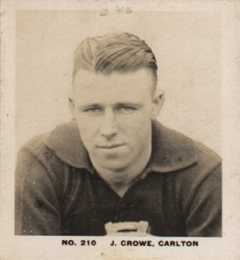 Determined and versatile, Jim Crowe was a regular finals player throughout his six years at Princes Park from 1929 to 1934. Originally regarded as a goal-kicking rover, he later became a creative back pocket, and formed a notable combination with Carlton’s star full-back Frank Gill. But at the peak of his career, Crowe walked from Princes Park after an apparent dispute over his role in the team, and two years later, played in a Premiership side for Collingwood. He then served his country in World War II, before spending one season as coach of Footscray.

Crowe was born in Carlton, and began his football journey with two local clubs; Railways, then Royal Rovers. At the age of 17 in 1927, he joined Carlton Reserves, and a year later played at half-back when the Blues Twos completed their ground-breaking hat-trick of 1926-27-28 flags. Carlton’s senior coach at that time, Dan Minogue, liked what he saw on that victorious afternoon, and duly selected Crowe to make his senior debut as second rover in Carlton’s match against Essendon at Princes Park in the opening round of 1929.

Carlton promptly thrashed the hapless Same Olds by 73 points, and Crowe did enough to justify his place in the side for nine more games that year. He played finals football for the first time when Carlton ended the home and away season as runners-up, but didn’t come up for the Blues’ harrowing 6-point loss to Richmond in the Preliminary Final.

From then on, as part of Carlton’s skilful fleet of small men, Crowe cemented his place in the Blues senior team. He saw September action again in 1930 and ’31, but the team fell short of the Grand Final both times. Meanwhile, after Blues captain Ray Brew badly injured a knee early in 1931, coach Minogue turned to Crowe to cover for his captain in the back pocket. Jimmy complied, and proved to be a revelation deep in defence where his anticipation, sure ground play and creativity complemented the work of an emerging star; full-back Frank Gill. Crowe was recalled to his customary roving role for the finals, leaving Minogue secure in the knowledge that he had found another defensive weapon.

By 1932, complications in the wake of Ray Brew’s knee injury had ended his playing career. However, it was not all bad news. The recruitment of brilliant West Australian rover Ron Cooper provided considerable compensation. It also gave Minogue the freedom to play Jim Crowe regularly on the last line of defence – even though Jimmy’s set shot goal-kicking was so reliable that he was always preferred up forward when a match hung in the balance.

After being reunited in Carlton’s back half, Crowe and Gill both enjoyed consistent, yet ultimately futile seasons in 1932. They were side by side at full-back when the Blues battled through to a Grand Final showdown with Richmond, and both were named among Carlton’s best in another brave, heart-breaking defeat.

In 1933, Geelong beat the Blues by 13 points in one Semi Final as the disappointments continued, and only a few months later, Jim Crowe’s career at Carlton came to a premature end. Jimmy had roved in the first three matches of 1934 for two wins, and a heavy loss to Richmond at Punt Road. In the aftermath of that loss, Crowe was relegated to the bench for the next match, and apparently wasn’t happy about it. He made his feelings clear to whoever was responsible, and as a consequence, didn’t play again until round 11 – when Carlton hosted Essendon at Princes Park. Whether his team-mates knew before, or after the match that he was finishing up is unclear. But either way, they sent Jim off in style with an emphatic 39-point win over a team that was entrenched near the bottom of the ladder. Crowe and Gill played together for the last time in a high-scoring, entertaining affair.

On 7 March 1935, Crowe was appointed coach of the Carlton second eighteen side. The committee announced this appointment would not prevent Crowe being selected for the seniors if his services were desired.

Two years later, Crowe surprised by making a comeback to VFL football with Carlton’s fiercest rival, Collingwood, and the sound of gnashing teeth was heard all over Princes Park on Grand Final night 1936, when Jim won a Premiership at last for himself and the hated Magpies. In 21 matches for the ‘Pies, he had rediscovered his very best form in a back pocket alongside their champion full-back, Jack Regan.

Jimmy retired again after that triumph, and settled down to his job as a senior clerk with the Victorian public service. He studied accountancy, and joined the army reserve, or Militia. When World War II began in 1939, he tried to enlist, but was denied at first because his occupation was considered to be essential for the war effort. When he did eventually make it into uniform, the army quickly discovered that he had outstanding administrative and organisational skills. Serving with the Army Ordnance Corps in Australia and the Pacific Islands, he rose rapidly through the ranks from Private to Sergeant, and then was commissioned as a Lieutenant in the last months of the conflict.

Jim came home in 1945, took up residence in Kew with his family, and in 1947 accepted an approach to coach Footscray. The Bulldogs had been finalists the previous year and their player list was strong - but in a horror season, injuries and suspension cost them dear and they tumbled down the ladder to eighth. Jimmy had wanted to continue on, but wasn’t re-appointed.

1936 April 28
"Jimmy Crowe, the former Carlton player, and lately coach of the seconds, is to try his luck at Collingwood. He will appear at training tonight. Crowe has given great service to Carlton since he rose from the seconds in 1928, and played 83 senior games. His last senior game was on July 21 1934." (The Argus)

In 1938 Jim Crowe was appointed coach of the Footscray Seconds.

Articles: A Change of Interchange | The Fish that Got Away