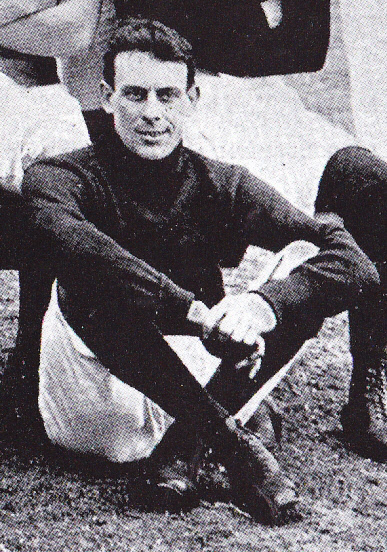 George Thomas Topping’s colourful career with the Carlton Football Club spanned 15 seasons, but only 125 games. An often brilliant, yet fiery-tempered forward, he played in all three of Carlton’s hat-trick of Premierships in 1906, ’07 and ’08. In 1910 he was suspended for 18 months, and remarkably, later became an umpire himself.

George, who was born in Fitzroy, played his early football for Carlton Juniors, and was invited to a trial with the senior team in 1902 – the year new secretary (in fact, coach) Jack Worrall arrived at Princes Park on a mission to lift the Blues after years of struggle. Although he was lightly-framed at 166 cm and 61 kg, Topping was a born forward. His ability to read the play, his anticipation, marking strength and accuracy made him a dangerous proposition anywhere near the goals. He was also a plucky type who stood his ground under any sort of intimidation. This trait invariably brought him under the notice of the umpires.

George ran out onto Princes Park for his first senior game in round 10 of 1902, against St Kilda. The Blues won by 23 points, and he impressed his coach enough to hold his place for the remainder of the year. By 1906 George had racked up almost 50 games, and was a recognised star by the time Carlton qualified for our first-ever VFL Grand Final against Fitzroy.

On that special day, in front of a crowd of more than 44,000 at the MCG, Topping slotted two goals from full-forward in Carlton’s emphatic victory by 49 points. In 1907 he kicked three from the pocket in Carlton’s heart-stopping 5 point defence of our title, and in 1908 he played from a pocket again in another hard-fought triumph over Essendon - giving Carlton a ground-breaking hat-trick of VFL flags. George was one of just eleven Blues who played in all three Premiership teams, and in 1909 he came within two points of making it four in a row.

Carlton went into the 1909 Grand Final against South Melbourne with confidence, after comfortably beating the Bloods in the Second Semi-Final. But the Southerners had done their homework, and in a ferocious, low-scoring encounter, South won by two points. Each side kicked just four goals, with two of Carlton’s majors coming from Topping at full-forward. George didn’t miss a game all that season, and was Carlton’s leading goal scorer for the year with 36.

No doubt that narrow defeat burned deep at Carlton, which perhaps explains the circumstances of the rematch between the two sides (in round 4 of 1910) at Princes Park. Mirroring the Grand Final, both teams threw themselves into the contest. The field was no place for the faint-hearted, as skirmishes erupted at regular intervals. Carlton were the better team after half time, and were leading by 17 points only a minute or so before the bell, when South Melbourne defender Herb Streckfuss was crashed to the ground, unconscious.

The field umpire promptly reported Topping, who had to be escorted from the ground by police. At the subsequent tribunal hearing, George was found guilty of striking, and stunned when he was suspended from playing until 1912. Effectively, he was outed for 35 games.

By any reckoning it was a harsh penalty, but it should be pointed out that for a number of years Australian football had been plagued by complaints about ‘thuggery and rough play outside the rules.’ So the VFL, as recently as March 1910, had vowed to come down hard on those found guilty. Still, it’s hard to disagree with Carlton’s opinion that George was made an example of.

After serving out his suspension, Topping came back to Carlton to wear guernsey number 17 in just one match in 1912, then created much surprise by announcing that he was hanging up his boots to swap competitions and become an umpire in the VFA. He officiated in three senior Association games in 1913, before rethinking his decision and making a comeback as a player with the Blues (at the age of 32) in 1914.

When World War 1 began in September of that year, it heralded a steep decline for both football competitions as thousands of young men (and indeed, many league players) volunteered to serve in the armed forces. George played two games in 1914, and rounded out an eventful career with two more in 1916.

Close to the club for the rest of his life, George passed away at Brunswick on the 17th November, 1958, aged 77.

A player named Topping (Carlton) was named in the Victorian Junior Football Association team, as a follower, that played the VFL premiers Essendon on the East Melbourne ground 26 April 1902.

Former Carlton champion player George Topping was the umpire of the St. Patricks (Albury) - Rutherglen match played on Saturday May 06 1922. Topping controlled the match impartially and punished players for the slightest breach of the rules.