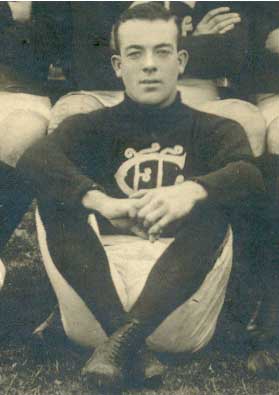 Andrew James McDonald was a small, but versatile and courageous player who featured in finals in all but one of his ten seasons with the Old Dark Navy Blues during the tumultuous decade before and after World War 1. A true utility who never let his slight stature interfere with his hunger for the contest, he wore six different guernsey numbers during his career at Princes Park, and was one of the stars of our consecutive Premiership wins in 1914-15.

McDonald was born in Footscray and recruited from Yarraville VFA. He was 24 years old by the time he joined the Blues in 1910, stepping up impressively when he was chosen to replace Carlton’s injured champion Rod McGregor for the home match against Collingwood in round 1, 1910. When McGregor returned a fortnight later, McDonald was switched into a roving role in tandem with Alex Lang – until Lang and two other Blues were sensationally suspended for match-fixing on the eve of the 1910 Semi Final.

Not surprisingly, Carlton lost that game to South Melbourne - but as minor premiers, we were entitled to challenge the winner of the Preliminary Final between Collingwood and South, and wasted no time in doing just that when the Magpies emerged victorious. McDonald was then joined by Martin Gotz as Carlton’s roving duo for the Grand Final, and in a violent, controversial match, Collingwood beat the Blues by 14 points. At that point in his career, McDonald had played all of 20 games, and kicked 19 goals.

When individual player numbers were introduced during the 1911 finals, McDonald was allocated number 18, but wore it only once. He switched to number 12 in 1912, and also carried 3, 4, 5 and 8 onto the field before his career was through. As well, season 1912 was the year when he was shifted to a half-back flank by his coach Norman Clark, to became a dashing rebounder. Cleverly reading the play, he loved to swoop on the ball as it spilled off the pack, before taking off downfield in a jinking solo run.

In 1914, barely weeks after Australia was drawn into World War 1 by our allegiance to Great Britain, Carlton claimed our fourth VFL Premiership after a stirring contest against South Melbourne. Sent to a back pocket on the eve of the match, McDonald curbed his attacking flair to keep a tight rein on the Bloods’ rovers. From then on, he was often asked to take on a similar task in big matches, and rarely failed.

The highlight of McDonald’s career came in the 1915 Grand Final, when, along with George Challis and Ted Brown, he was outstanding in Carlton’s emphatic victory over Collingwood. In a match described as a ‘one of the grandest ever seen in the finals,’ the Blues piled on five goals (to Collingwood’s one) in the last quarter, and won easing up by 33 points.

McDonald was a stalwart for the Blues throughout the rest of those often-grim war years, playing solid football wherever he was needed. He eventually retired at the age of 33 in 1919, following Carlton’s Semi Final loss to Collingwood.

Andy McDonald, the trusty Carlton "back," has played football in good company for ten years. In season 1908, as centre man for Yarraville, he made a great reputation among juniors of the first grade. It was his pace, skill and tenacity that then attracted the attention of senior touts; and these are the qualities in his play which still appeal to friend and foe alike.
Being fairly weighty (11.4), and not too big (5.5). McDonald can dart through the crowd with the very best of them. He is a good kick, and for a time excercised this function as one of Carlton's forwards. His first appearance with the Blues, however, in 1910 found him playing in the centre, against Collingwood where he was opposed by the esteemed veteran McHale. When called upon to play forward his place in the centre was taken by Rod McGreogor, who still fills the bill there with such eminence.
In McDonald's forward play the evidences of dependability were so marked that he was called upon to assist in defence and took up a position on the half-back line. Later he transferred to the back line, where his never-say-die methods applied with great eagerness and undoubted skill, give to Carlton supporters a comfortable sense of security. Every footballer finds himself in a knot from time to time, but few tackle the task of untying with such goodwill and capability as McDonald, who does not seem to know when he is beaten.
Like other good men he can run with the ball in the usual way, but he is at his best when so closely pressed that a moment's handling of the ball might incur a penalty for holding it. At such a time McDonald keeps possession by merely patting the ball forward without handling it at all. To bring off a series of these pats while hard pressed and travelling at streak speed, bespeaks a high order specialism. With the exception of goal-kicking fotbalers have no opportunity of registering their smartness. The cricketer records his century or his ten wickets, but the footballer cannot reduce his work to figures other than in goals.
In 1914, however, upon the occasion of Carlton playing Collingwood, two medals were presented, one to go to the best player on each side, and McDonald was judged to be the best Carltonian. This season he is proving a slow starter, but a week or two may find him in uniform ready to "save the situation" whenever the Old Blues are assailed. Mcdonald is popular with his comrades, who appreciate his unassuming manner and cheerful friendlyness. His hobby after football, is motor cycling where he can attain a momentum in reasonable keeping with his football dash.
(The Weekly Times May 18 1918 p20)

The Independent (Footscray), May 01 1909
"Young Andy McDonald of Yarraville is being absolutely tormented by representatives of senior clubs, who are particularly desirous of securing his able services.
The chief offender is the Carlton club, and this powerful organisation is using every possible endeavor to presuade the brilliant Yarravillite to join it's "amateur" ranks. It is rumored a place could be found at £2 per week. Such a high valuation is certainly an admirable compliment.
However, Carlton, nor anyone or anything else, will tear Andy away from his old club. He has determined on that."

Articles: Doug Fraser and the Bribery Scandal of 1910