The first Carlton Reserves (or Seconds) team was formed in 1866. Details of many of these matches can be found in the Pre VFL year by year section of Blueseum.
The reserves competition petered out in the 1890's probably due to the severe economic depression which greatly affected Victoria.

Carlton Juniors and/or Carlton District were probably the feeders for the senior club until the establishment of the VFL Reserve Competition.
Further research is required into these competitions.

"Representatives of the Junior Football League waited on the Victorian Football League last night to further its organising proposal.
The idea is that each League club should have a junior club "under its wing," and by encouraging it, financially and otherwise, bring it to a state of playing perfection,
for the good of junior sport, and also the strengthening of the senior clubs. Under the scheme district rules will be observed.
It was stated that Fitzroy Juniors, Collingwood Juniors, Leopold and Caulfield had withdrawn from the Metropolitan Amateur Association, and would play in the Junior League competition.
Essendon nominated West Melbourne Juniors as its junior team, and Richmond, Carlton and St.Kilda will be asked to form junior clubs in their districts. The League advised the
representtives to hold a meeting and draw up rules for its approval or otherwise." (The Age January 18 p13)
The Caulfied Football Club will be known as the Melbourne Juniors, training and playing on the MCG. (Herald April 11 p3)
With the establishment of the Junior League means that there are now three junior bodies, VJFL, VJFA and the Metropolitan Association of Amateurs.

1922 Geelong for the first time, entered a second eighteen team in the Victorian Junior Football League. Their first match on May 6th. was against Coburg on the Geelong Oval. This was followed by a match against Essendon Juniors on May 13th at Essendon.
"The Geelong second eighteens will play the junior team whose senior club has an engagement with the Geelong Seniors on the same day, the grounds of course being reversed.
The Junior League's consitution provides that not more than six senior players or permits can be played in the second eighteen in any one season. It also provides that no junior player will be classed as a senior player until he has played seven matches with the Senior League club." (Geelong Advertiser April 10 p2) 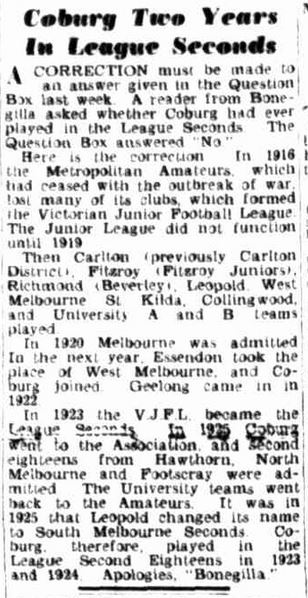 This page tracks information about the success of the Carlton Football Club in the Reserves Grade competition, in place from 1919 until 2002. Thereafter, Carlton - like many of the Victorian based AFL Clubs - chose to disband its Reserves team and work with an affiliate team in the VFL - the Northern Bullants (later the Northern Blues). Information regarding those teams is provided here.
The Northern Bullants were a rebranded Preston Football Club which for many decades held a prominent position in the old VFA.
The Blues had a proud history in this competition, particularly during the 1980's when our playing stocks were swelled with a successful national recruiting drive. Details of our Premierships at Reserves level are highlighted in light blue below:


NB : Carlton had a side in the VFL (old VFA) between 2000 and 2002, before joining up with the Northern Bullants.
In 2021 Carlton would again field it's own stand alone club in the Reserves (VFL). A 22 team competition which included 5 interstate teams.
The Northern Bullants would also field a team in this competition.